Are you feeling that your life has taken a different turn and you’re lost without your dessert dates?

It was the first week after lockdown was announced. For the first time I had witnessed the curfew too. COVID-19 really scared us all in here in India. People were confused and clueless about what was the real deal about the virus that hit the whole world. Unexpectedly, people were stranded in foreign countries and not allowed to travel, schools and offices called off or work-from-home, poor people lost their jobs, small industries suffered too and markets went bad.

Now, this was a curve too hard to ignore! This really gave a new turn to a lot of journeys and minds. And here, I was thinking what I would do at home, without my office and friends, with my mom who does willingly participate in us being at peace when together. We both want to do everything to go our way in the house, though she is old; and one, too busy or cranky (yeah, that’s me).. So, that’s how my love for baking showed up. I remember, it was an afternoon on 24th March, 2020 and impromptu brownie making decision was made.

I was so excited as if I had got an intern’s job at a bakery next door! I did well too! And then it was time for me to give it to my family for tasting. My mom, being a champion in all sports in her young age and have learnt baking, might have secretly wanted her girls to learn baking – but never really spoke about it or taught us… haha. Surprisingly, she was happy and she complimented and was nice to us the whole day!! That was when I told myself that now no more stopping, let’s make some dessert for her daily..!

I prefer healthy alternatives and options when it comes to putting something into my belly, even if it’s a dessert! And for the first time I let it loose.. Being a vegan, all the ingredients I chose were plant-based, except for the flour. After this attempt, I made a whole-wheat chocolate lamington cake too, the recipe of which will follow this week. So, stay tuned..

This is the simplest recipe for a baked brownie, also the ingredients needed to make this are all mostly available in our house. So, if you’re thinking what life you’ve gotten into during this quarantine, do give it a try and let me know your feedback and experiences in comments. The milk I have used here is soy milk, as it is always there at my home. You may use your choice of vegan milk. Though, preferred is soy, coconut or almond.  Thank you for reading through the recipe and blog. Have a safe quarantine!

How to make garlic bread at home, without oven

Mini-Cinnabons at home from scratch! 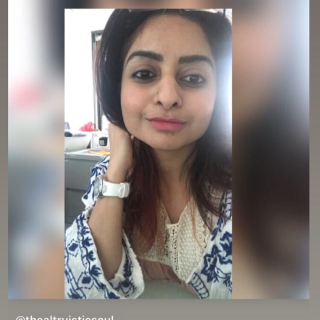